KTM 790 Duke: Everything You Need To Know

After being thrown off by a number of potential launch dates, we’ve finally got confirmation that the much-awaited KTM 790 Duke will be arriving in India on September 23. The latest KTM is likely to enter our shores via the CBU (Completely Built Up) route, which means it won’t be cheap. So, we’ve listed down five important facts to bring you up to date with everything there is to know about the bike.

Yes, the 790 Duke gets its race DNA from the much larger and brutal 1290 Super Duke R. However, its overall styling leans more towards the smaller 390 Duke, and so does its compact dimensions. In essence, the bike should be easier to ride around in the city and a hoot to ride out on the twisties or on the track. Dial-in its power figures and you’d be grinning for years to come.

Granted, the KTM 790 Duke produces less power compared to its rivals - the Kawasaki Z900, Triumph Street Triple RS or the Suzuki GSX-S750. However, 104.6PS and 87Nm of torque should be more than enough power considering our road conditions. Besides, it weighs a mere 169kg (dry), which makes it the lightest mid-displacement streetfighter in the ring. That translates to a power-to-weight ratio of 619PS per ton!

Though the 790 Duke’s parallel-twin motor is a first for the Austrian brand, it’s been praised the world over for its low- and mid-range performance and tractability thanks to its 75-degree crank offset and 435-degree firing order. The motor also features forged pistons and two counterbalancers to keep vibrations in check. Its 6-speed gearbox gets a bi-directional quick-shifter for clutchless up and downshifts.

Gets a truck-load of electronic rider aids:

The 790 Duke comes with four rider modes (Sport, Street, Rain, Track), engine brake control, adjustable wheelie control, IMU-based 9-level traction control and cornering ABS with Supermoto mode. You can navigate and select your desired settings via a full-colour TFT display, similar to the 390 Duke. While the bike falls a bit short in terms of features compared to the Triumph Street Triple RS, it does obliterate the rest of its competition.

Its suspension setup comprises of a WP non-adjustable 43mm upside-down fork and a WP monoshock with preload-adjustability. It gets a sharper 24 degree rake angle which aids its razor-sharp handling, hence the name ‘Scalpel’. Anchoring the bike are twin 300mm front discs with radially-mounted JJuan calipers and a rear 240mm disc. This comes paired with a radial master cylinder and steel braided lines which should offer better brake feel and bite. It’s 17-inch wheels come wrapped in 120/70-section front and 180/55-section rear, street-oriented Maxxis Supermaxx ST tyres. Holding all of this together is a Chromoly trellis frame and a one-piece aluminium rear subframe which keeps the weight down without compromising rigidity.

Since the KTM 790 Duke will be brought to India via the CBU route, it’s likely to get a price tag of around Rs 8.5 lakh (ex-showroom). While that seems unusually expensive for a KTM product, its potent engine and equipment list should make a good argument for itself. Plus, its limited run in India should make the bike quite tempting for enthusiasts or collectors. Dealerships have already started accepting bookings for the motorcycle for a token amount ranging from Rs 5,000 to Rs 25,000. 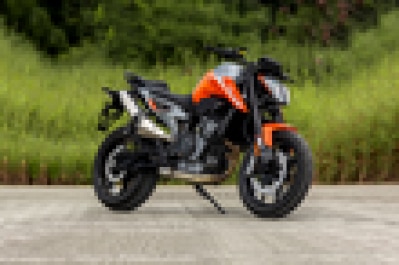